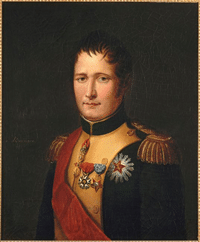 Destined to play an important role in his younger brother’s career, Joseph Bonaparte would accompany Napoleon in the early stages of the Italian Campaign and help negotiate peace terms with Sardinia. He went on to serve the Directory as foreign minister, and in 1797 moved to Paris to serve on the Council of Five Hundred, a position that would later pass to his brother Lucien. Following Napoleon’s rise to power, Joseph was named King of Naples and later King of Spain. Forced to abdicate, he returned to Paris in time to be driven out by the advancing Allies in 1813. Eventually returning to Italy, he died in Florence.