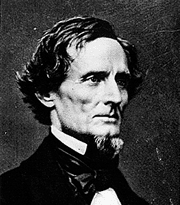 Born in Kentucky, Jefferson Davis graduated West Point in 1828 and served in the Black Hawk War (1832), after which he left the military to spend some ten years in seclusion on a Mississippi plantation. Elected to Congress in 1845, he took a leave of absence to serve in the Mexican War, following which he was elected to the Senate and served as Secretary of War in the Franklin Pierce administration. Joining the rebellion at the outset of the Civil War, Davis sought command of the Confederate army but was elected president instead. He showed few gifts for political leadership, however, and tended to quarrel with friends and enemies alike.  With the collapse of the Confederacy in April 1865, Davis fled southward and was captured in southern Georgia. He spent two years in federal prison before being released in 1867.