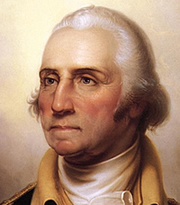 George Washington was born in Westmoreland County, Virginia, the son of a tobacco farmer of moderate means who died when George was eleven. Moving to the Fredericksburg area, he lived for several years with his half-brother, Lawrence, whose farm (known as Mount Vernon) he inherited upon the latter’s early death. In the French and Indian War, he led a militia unit on a diplomatic mission and later took part in the ill-fated Monongahela expedition. In 1759 he married wealthy widow Martha Custis, and by the time of the Revolution had become a leading figure in Virginia, his military background making him a natural choice for command of the Continental Army. In war, he revealed a genius for Fabian tactics and ultimately won by not losing. Acclaimed as the father of his country, he served two terms as its first president before returning to private life.