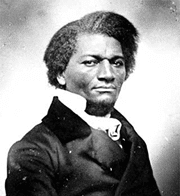 The son of a slave named Harriet Bailey and an unknown white man, Frederick Douglass was born into slavery near Easton, Maryland. At a young age, he was sent to Baltimore, where he became a house servant and was taught by his mistress to read and write. Later, under a new master, he was returned to fieldwork, but poor treatment led to physical resistance and in 1838 he escaped to New York City. Taking the name Frederick Douglass, he moved to New Bedford, Massachusetts, where he worked as a shipwright and began speaking about his life as a slave. Quickly finding an audience, he became an influential lecturer, playing a major role in the growing abolitionist movement and going on to become an outspoken advocate of women’s suffrage. In 1845 he published a widely-read autobiography, Narrative of the Life of Frederick Douglass.