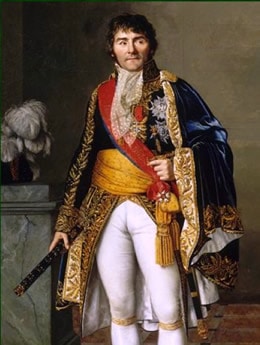 A career soldier at the time of the Revolution, François Joseph Lefebvre saw long and active service under the Republic and was in command of Paris troops on 18 Brumaire. Although a late convert to the Bonapartist cause, he played a key role in the coup d’etat, leading his forces against the Council of the Five Hundred with the words “Let us throw the lawyers into the river.” He became a Senator in 1800 and a Marshal in 1804. He served ably in Spain and in the 1809 Campaign against Austria but was temporarily replaced for his failure to subdue the Tyrol. Lefebvre voted for Napoleon’s abdication at Fontainebleau but rallied to the emperor during the Hundred Days.