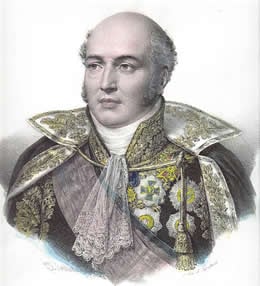 One of the ablest of Napoleon’s lieutenants, Louis Nicolas Davout was the son of a nobleman who had fallen on hard times. At the outset of the Revolution, he proved his devotion to the cause by seeking to arrest General Dumouriez upon the latter’s defection to the Royalists. Promoted to major-general for his role in the victory at Marengo, he went on to play an equally instrumental part in the victory at Austerlitz, and the following year his corps contained and shattered a large part of the Prussian army at Auerstadt. At Borodino, he managed to remain in command after suffering a concussion when his horse was killed by shellfire. During the Hundred Days, Davout was named Minister of War, but his absence as a field commander would be sorely felt in the Waterloo Campaign. In 1819, though clearly associated with the Emperor’s failed cause, Davout was named to the House of Peers. He died in Paris in 1823.