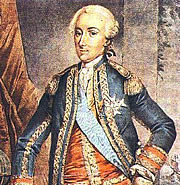 Charles Hector, Comte d’Estaing, was a French aristocrat who began his military career as an infantryman and, following a series of sea-borne successes on behalf of the French East India Company, emerged as a naval officer. In 1777 he was promoted to vice-admiral, and the following year he commanded a fleet of 26 ships bound for New York harbor, where he blockaded Admiral Howe’s fleet before proceeding to Newport, Rhode Island, in support of John Sullivan’s ill-fated campaign to seize the town from a British garrison. When Lord Howe’s fleet appeared in Narragansett Bay, d’Estaing put to sea to give battle only to be sent off course and dispersed by a major storm. Recovering in Boston, he sailed south and after a foray in the West Indies arrived in Savannah, Georgia, to lend support to Benjamin Lincoln’s siege of the city.