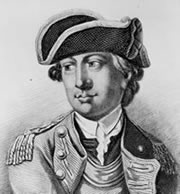 Charles Lee was born in England and served in General Braddock’s campaign against Fort Duquesne. His subsequent marriage to a Mohawk woman and adoption by the tribe suggested a somewhat erratic personality, yet by the time of the Revolution he had seen long service as a professional soldier and was considered a likely candidate for command of the Continental Army. Chosen to lead the Southern Department, he took part in the defense of Charleston (1776), but upon returning north was taken prisoner by a British patrol in New Jersey. Exchanged following the Battle at Saratoga, he led the American vanguard at the Battle of Monmouth, where his performance led Washington to suspect him of treason. He was later court-martialed.

Help support Age of Revolution content with a small donation of $2.95.
Charles Lee