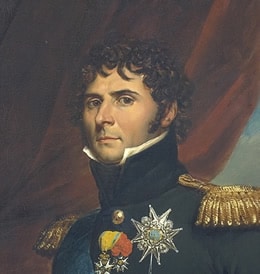 The son of a country tailor, Jean-Baptiste Jules Bernadotte was one of the few marshals who achieved prominence independent of Napoleon. Rising to the rank of general by 1794, he was named Minister of War during the final months of the Directory. He first served under Napoleon in the Italian Campaign and later commanded a corps during the Battle of Austerlitz; however, poor performance as a battlefield commander eventually called his loyalty into question and his open criticism of Napoleon’s handling of the Battle of Wagram led to his summary dismissal from the army. Having made secret overtures to the King of Sweden, he was named Crown Prince of Sweden in 1810 and in 1813 joined the coalition that would bring about Napoleon’s abdication at Fontainebleau. In 1818 he assumed the title Charles XIV, King of Sweden and Norway, and ruled his adopted country ably until his death in 1844.