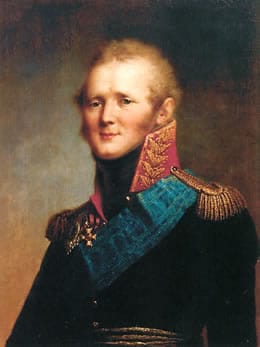 Alexander Pavlovich became Tsar of Russia at the age of 23, upon the assassination of his father, Paul I. In 1805, at Austerlitz, he suffered a major military defeat, which was followed two years later by the further Russian loss at Friedland, after which he entered into an alliance with Napoleon. Alexander’s ultimate refusal to comply with the continental blockade of England, however, resulted in a distinct falling out between the two and provoked the French invasion of Russia. Despite defeat at Borodino and the burning of Moscow, Alexander refused to make peace, and the ensuing retreat and destruction of the Grand Army proved a dramatic turning point in his reign. He would go on to join the combined counter-march of Allied armies, entering Paris and forcing Napoleon to capitulate in 1814.