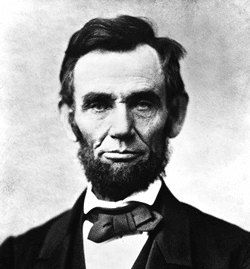 Born in western Kentucky, Abraham Lincoln served in the Black Hawk War (1832) and was promoted to captain. Though elected to the U. S. Congress in 1847, he grew disillusioned with politics and did not run for a second term. In 1856, his enthusiasm rekindled by the growing debate over slavery, he joined the newly-formed Republican Party and two years later ran for the Senate, gaining notoriety for his opposition to the extension of slavery in the territories. Though he lost the senate contest he won the presidency in 1860, a victory that led to the secession of the southern states and war. He began the war proposing only to preserve the Union but soon recognized the need to deal with the deeper cause of the conflict, and in 1862 issued the Emancipation Proclamation, setting as the war’s higher goal the abolition of slavery. After leading the nation through its most profound political crisis, he was assassinated in Washington on 14 April 1865.