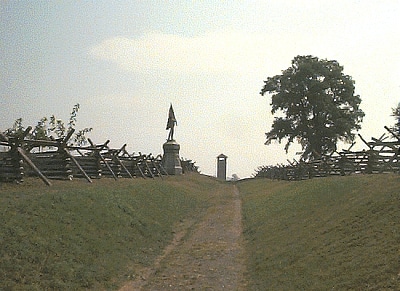 Bloody Lane, Antietam Battlefield: Following repeated frontal assaults across the fields to the left (north), Federal troops flanked and enfiladed Rebel defenders of this sunken road, which was soon filled with dead and wounded.

September 12, 1862: On this day in a Union encampment outside Frederick, Maryland, Corporal Barton Mitchell made a happy discovery while crossing a stretch of meadow. There, wrapped in a piece of paper, were three cigars whose rightful owner was nowhere to be found. Even more enticing than the free smokes was what was written on the piece of paper that bound them together. Under the heading Army of Northern Virginia Special Orders No. 191, the orders revealed the dispositions of General Lee’s entire army, which lay some ten miles away on the other side an extended ridge known as South Mountain. Once forwarded to headquarters, it provided Union commander George McClellan with certain knowledge of the whereabouts of Lee’s forces, which were widely dispersed and as-yet unaware of the proximity of the enemy. It remained only for McClellan to march westward through the passes of South Mountain to catch the unsuspecting Rebels before they could unite, promising a swift end to Lee’s invasion of Maryland, if not the destruction of his army.

McClellan was nothing if not cautious, however, as evidenced in the Peninsular Campaign of earlier that year (in which he had earned the surreptitious nickname “the Virginia Creeper”). Now, true to form, he spent a full day drawing up plans before putting his army in motion. Meanwhile, having learned that Orders No. 191 had gone missing, Lee assumed the worst–that they had fallen into the hands of the enemy–and responded accordingly, sending all available troops to defend the passes and moving quickly to assemble the rest of his far-flung forces in and around Sharpsburg, Maryland. At dawn on the fourteenth McClellan’s troops stepped off at last, and by mid-afternoon were engaged in a stubborn fight up the eastern slope of South Mountain, where Rebel resistance prevented them from breaking through. The next day, the fifteenth, the federals awoke to find the enemy fled, but it took them the rest of the day to make their way to the vicinity of Sharpsburg, where, a mile east of town, a minor tributary of the Potomac called Antietam Creek presented a natural barrier dividing the opposing armies.

By this time, west of the creek, Lee had assembled some 25,000 troops, about half his force, and remained exceedingly vulnerable to a concerted attack from McClellan’s army of around 60,000. Even so, McClellan hesitated, spending the day formulating careful battle plans while outlying Confederate units raced to come into line in a desperate effort to level the numerical disparity. Near sundown on the sixteenth McClellan sent two of his five corps (each consisting of about 12,000 men) across the creek north of Sharpsburg, but any concerted fighting would have to wait until morning, by which time Stonewall Jackson’s corp would be prepared to face them on what would become the costliest single day in American history.

Historians have long struggled–as did President Lincoln himself–to understand the character of George McClellan, who proved a brilliant administrator yet seemed to lack qualities essential to a successful battlefield commander.