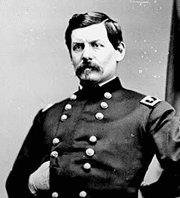 Philadelphia-born George Brinton McClellan graduated West Point in 1846 and fought in the Mexican War before leaving the military in 1857 to serve as a railroad executive. Returning to service at the outset of the Civil War, he made a name for himself by clearing western Virginia of a number of small Rebel forces and was chosen by Lincoln to head the Union army following its defeat at First Bull Run. Though he proved a brilliant organizer, as a battlefield commander his performance was characterized by over-cautiousness and a failure to maintain the initiative. Replaced by A. E. Burnside following the Battle of Antietam, he would make an unsuccessful run for president against Lincoln in the election of 1864.