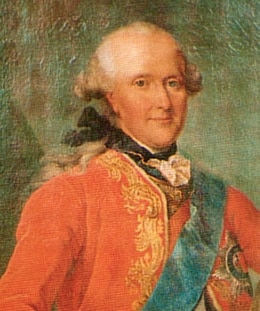 A nephew of Frederick the Great and prince of the Holy Roman Empire, Charles William Ferdinand first saw military service in the Seven Years’ War, earning distinction against the French in the Battle of Hastenbeck. By the time of the French Revolution, he had earned a reputation as both an expert in military affairs and a prudent statesman, prompting French officials to offer him command of the revolutionary army. Instead, he chose to support the monarchists in the cause of restoring Louis XVI to power. Leading an Austro-Prussian army into France in 1792, he confronted the fledgling Republican army at Valmy, an encounter that ended in a tactical stand-off yet sent French morale soaring. Repeated meddling in military affairs by the Prussian king, Frederick William II, compelled Brunswick to leave the military in 1794, but he returned in 1806 to lead Prussian forces in the War of the Fourth Coalition. Mortally wounded in the fighting at Auerstadt, he died several weeks later.