Editor’s note: The two-day battle at Shiloh (Pittsburgh Landing, Tennessee) marked the first major Union victory of the Civil War and proved a gruesome portent of the fighting to come.

From “The Devil’s Own Day,” FATEFUL LIGHTING, by William Hillenbrand:

By the first week of April, 1862, General Grant was in camp at Pittsburg Landing on the west bank of the Tennessee just a brisk march from the Mississippi border. He had spent most of the previous month drilling his troops, waiting for Buell’s Army of the Ohio (making its laborious way down from Nashville), and planning a drive into Mississippi. That plan says much about Grant’s genius as a field commander: his first instinct was always to focus on what he was going to do to the enemy, never on what the enemy might to do him. It was a combative instinct that would make him supremely successful, but in April of 1862, with his back against the bluffs of the Tennessee River, it would leave him supremely vulnerable. Five of Grant’s divisions were camped on a broad, high plateau just west of the landing between two creeks, Snake Creek to the north and Lick Creek a couple miles to the south. A sixth was just north of Snake Creek protecting Crump’s Landing downriver. Although Grant was well aware that Johnston was posted in force in Corinth just twenty-odd miles away, he gave little thought to defense. First, he supposed that Johnston, already beaten in spirit and leading a demoralized army, would never attack. To Halleck he had wired that he had “scarcely the faintest idea of an attack . . . being made upon us.” To his staff he said frankly that he expected Corinth to fall more easily than Donelson. One of his brigadiers, Charles F. Smith, went so far as to say that he “wanted nothing better than to have the Rebels come out and attack us. We can whip them to hell.” Second, thinking offensively, Grant wanted his army to think offensively too. To entrench on a defensive line, Grant believed, would thwart the aggressive spirit of his army. It was a motion seconded by General Smith: “if we begin to spade [the men] will think we fear the enemy.” In the end Grant’s divisions lay in their camps with only casual patrols and a loose line of pickets to discover what might be just west of a little log meetinghouse called Shiloh Church. 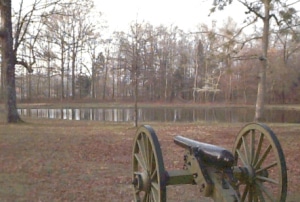