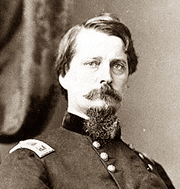 A native of Pennsylvania, Winfield Scott Hancock graduated West Point in 1844 and served in the Mexican War. He was promoted to brigadier in September of 1861 and earned the nickname “Hancock the Superb” during the Peninsular Campaign. Rising to corps command on the eve of the Battle of Gettysburg, he took charge of Union forces on Cemetery Hill during the first day’s fighting and was largely responsible for its successful defense. Following the war, Hancock was the Democratic nominee for president in the election of 1880, narrowly losing to fellow Civil War veteran James Garfield.