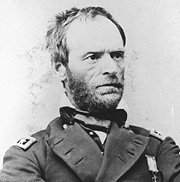 Born in Ohio, William Tecumseh Sherman graduated West Point in 1840 and was stationed in Florida, Georgia, and South Carolina during his early army career. In 1853 he left the military for several years to try his hand at banking and the law but returned when war broke out. He led a brigade at First Bull Run and was later sent west, where, together with Grant, he became a leading practitioner of “total war,” operating against the enemy’s infrastructure as well as his troops in the field. After capturing Atlanta in 1864, he cut a wide swath through Georgia to Savannah, then moved north through the Carolinas, forcing the surrender of J. E. Johnston’s army near Raleigh on April 17, 1865.