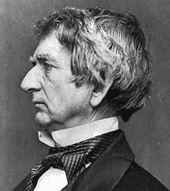 A former legislator and governor of New York State, William Henry Seward was elected to the U. S. Senate in 1849 and proved an outspoken opponent of slavery. Narrowly defeated by Abraham Lincoln in the Republican presidential primary in 1860, he was named Secretary of State in the Lincoln government and played an important role in preventing the recognition of the Confederacy by foreign powers, principally England. He was also instrumental in choosing a favorable occasion for the announcement of the Emancipation Proclamation, an occasion provided by the Union victory at Antietam. In April of 1865, Seward was grievously wounded by a member of the conspiracy that assassinated Lincoln.