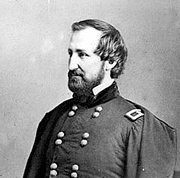 A native of Ohio, William Starke Rosecrans graduated from West Point in 1842 and began his Civil War service in western Virginia under George B. McClellan. He served under Henry Halleck at Corinth, Mississippi, and was eventually placed in command of Halleck’s army. Later, he stalemated Braxton Bragg in the hard-fought Battle of Stones River and went on to push the Rebels out of Chattanooga in an effective campaign of maneuver. Following the Union defeat at Chickamauga, however, he was replaced as army commander by George Thomas. After the war, Rosecrans served as Minister to Mexico, and later as U. S. Congressman from California.