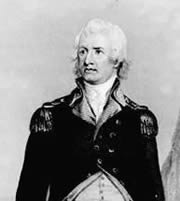 Born in Charleston, South Carolina, William Moultrie first made a name for himself as a captain of militia in a 1761 campaign against the Cherokee. Joining the Patriot cause at the outbreak of the Revolution, he served as second-in-command in the defense of his native city, where he was charged with building a fort on the northern approach to the harbor. Lacking adequate materials, he was obliged to use palmetto logs for walls, a measure deemed inadequate by newly-arrived General Charles Lee. Yet when a series of British ships fired salvos at close range the walls proved entirely effective, enabling the American gunners to wreak havoc on their attackers. The British defeat would be avenged in 1780, however, when General Clinton successfully besieged the city, taking its defenders prisoner. Exchanged at the end of the war, Moultrie would go on to become governor of South Carolina.