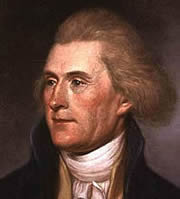 Thomas Jefferson was born in Shadwell, Virginia, to a wealthy and influential family. He attended William and Mary College, graduated with highest honors, and went on to study law, gaining admittance to the bar in 1767. Later elected to the Virginia legislature, he published a sweeping rebuttal to the Coercive Acts, earning a reputation for deeply principled resistance to British rule. In 1776, as part of the Second Continental Congress, he was chosen to draft what many considered would be a mere statement of intention. Instead, the Declaration of Independence expressed the core principles of an emerging nation, giving Jefferson a leadership role in the formation of the United States, which he would serve as minister to France (1784-’89), Secretary of State (1789-’93), Vice President (1797-1801) and President (1801-’09).