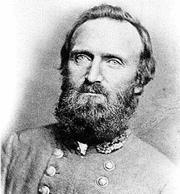 Born in western Virginia, Thomas Jonathan Jackson graduated West Point in 1846 and served in the Mexican War, later returning east to teach mathematics at Virginia Military Institute. Fiercely devoted to God and the southern cause, he won early fame in the Civil War at First Bull Run, where his defense of Henry House Hill served to rally the Rebels and earned him the enduring nickname, “Stonewall.” One of the most tenacious and resourceful fighters of the war, he was gravely wounded in the midst of one of his greatest tactical triumphs, a sweeping attack upon the Union right flank at Chancellorsville. Following the amputation of his left arm, he lingered for several days before dying of pneumonia.