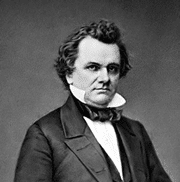 A well-known national figure at the time of his debates with Abraham Lincoln, Stephen Arnold Douglas had served in the Senate since 1847 and chaired the important Committee on Territories. He responded to Lincoln’s careful questioning on the fate of slavery in the territories with a policy that came to be known as Popular Sovereignty, by which the citizens of the territories would be allowed to decide the issue for themselves. Though Douglas went on to defeat Lincoln in the senatorial election of 1858, the inherent flaws of this policy were soon revealed in the bloody turmoil that swept across Kansas. In the presidential election of 1860, Douglas’ candidacy served to split the Democrats, enabling Lincoln to win the presidency.