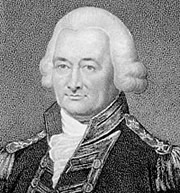 Thought to have been born in Ireland, Peter Parker joined the Royal Navy early in life and by the time of the Revolution had been knighted. In 1776 he was sent on a mission to prevent the southern provinces from joining the Patriot cause. Charged with escorting transport ships carrying 2,000 regulars, he set sail from Ireland to North Carolina, where he was to rendezvous with Henry Clinton. Preempted by the Patriot triumph at Moore’s Creek, however, the expedition continued south to Charleston, where Parker’s fleet was shattered by hastily-constructed shore batteries at Fort Sullivan and the Admiral himself had his trousers torn off by a flying splinter. Despite the humiliating defeat, he went on to take part in the successful captures of New York City and Newport, Rhode Island, and would replace Admiral Howe as Commander-in-Chief, North American Waters.