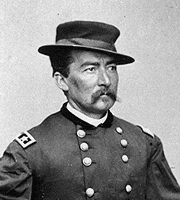 Philip Henry Sheridan graduated from West Point in 1853 and began his Civil War service as a staff officer in General Halleck’s headquarters. Later promoted to brigadier, he proved his mettle at the Battle of Stones River, where his determined stand bought General Rosecrans time to recover from a massive flank attack. Brought east by Grant in 1864, he won fame for driving Jubal Early’s army out of the Shenandoah Valley in a campaign that culminated in the Battle of Cedar Creek. In the spring offensive of the following year, he was instrumental in the Union victory at Five Forks and the final pursuit of Lee’s army. Following the war, he commanded the Department of the Missouri and was later named commanding general of the U. S. Army.