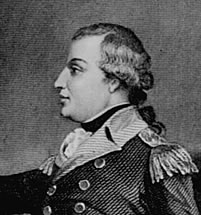 Born in Ireland, Richard Montgomery briefly attended Trinity College before joining the British Army. He was sent to North America at the outbreak of the French and Indian War, and served at the Siege of Louisbourg, in the Caribbean, and as far west as Detroit. In 1772, having entertained doubts about Britain’s colonial policies, he left the army and bought a farm north of New York City. Upon the outbreak of the Revolution, he was appointed Brigadier General in the Continental Army and enlisted in a planned invasion of Canada. Advancing northward from Fort Ticonderoga, he captured Montreal, then moved down the St. Lawrence River to join with Benedict Arnold’s overland expedition in an attack on Quebec. Killed by cannon-fire at the gates of the city, his loss would be widely mourned.