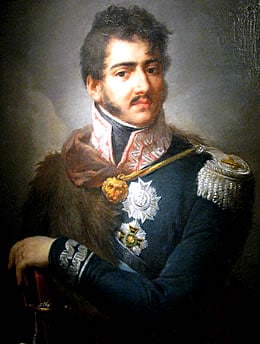 Nephew to Polish King Stanislaw II, Prince Jósef Antoni Poniatowski served in the Austrian army before joining the fight for a reconstituted Poland in 1789. With the defeat of Polish forces by Russia in 1792, he was forced into exile but was given divisional command in the Grand Army following the victory at Jena/Auerstadt. During the 1809 Campaign, Poniatowski defeated the Austrians at Gora and Grochow, and during the Russian Campaign, he fought ably on the French right at Borodino. Remaining loyal to Napoleon following the retreat, Poniatowski distinguished himself in the early fighting at Leipzig and received his marshal’s baton on the field, becoming the only non-French commander to achieve the rank. Two days later, under attack, he drowned while attempting to swim the Elster River to safety.