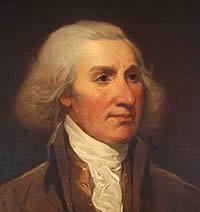 Born in Albany, Philip Schuyler was heir to a large estate which he expanded through marriage and productive life. In 1755 he received a commission to raise a company of soldiers and went on to serve as quartermaster to General Bradstreet. Following the French and Indian War, he entered politics as a member of the New York Assembly and was later appointed Major General of the Continental Army with command of the Northern Department. Though he helped plan the invasion of Canada via Lake Champlain, poor health obliged him to place Richard Montgomery in command. Two years later he was blamed for the loss of Fort Ticonderoga during General Burgoyne’s counter-march; however, he would be vindicated following the Patriot triumph at Saratoga. He was later elected Senator for New York in the First U. S. Congress.

Help support Age of Revolution content with a small donation of $2.95.
Philip Schuyler