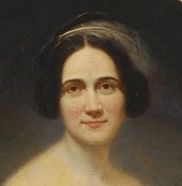 Born Mary Boykin Miller near Columbia, South Carolina, Mary Chesnut was the daughter of Stephen Decatur Miller, a governor and later United States Senator. At age 17 she married James Chesnut, Jr., a lawyer and politician who followed in his father-in-law’s footsteps, entering the United States Senate in 1858. Three years later, at the outbreak of hostilities, Chesnut was a member of the Provisional Congress of the Confederacy living in Charleston, where he and his wife bore witness to the firing on Fort Sumter and many of the important events to follow. A dedicated diarist, Mary wrote a day-by-day account of life in the Confederacy, giving a profoundly human voice to the passing of a world soon to be swept away in a firestorm of war. First published in 1905 under the title, A Diary from Dixie, her four-year chronicle was revised and re-released in 1981 as Mary Chesnut’s Civil War.