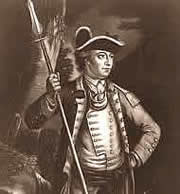 The son of a schoolmaster, John Sullivan was born in New Hampshire, and at age 24 began a law practice in Durham, where he earned a reputation for personal litigiousness that won him few friends but considerable wealth. Despite a close relationship with the royal governor, he joined the Patriot cause and upon the outbreak of the Revolution served as a brigadier at the siege of Boston. In his first independent command, he led an advance on Quebec, but was turned back in a sharp action at Trois Rivieres. Later taken captive in the Battle of Long Island, he was involved in peace overtures between Admiral Howe and the Congress, for which he was widely criticized. Rejoining the main army late in 1776, he played a key role in the raids on Trenton and Princeton, and served to the end of the war.