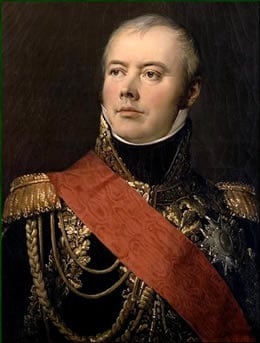 Descended of Scottish exiles, Etienne-Jacques-Joseph-Alexandre MacDonald was born in Sedan and had seen five years of service in the French army by the time of the Revolution. During the 1809 Campaign, he joined the Grand Army at Vienna and played a key role in the Battle of Wagram, where his troops turned back a massive Austrian counter-attack. For his part in the victory, he was promoted to Marshal on the field. After serving in Spain, he took part in the Russian Campaign, helping cover the army’s headlong retreat and narrowly escaped entrapment by the advancing Russians. Macdonald voted in favor of Napoleon’s abdication in 1814 and remained loyal to Louis XVIII during the Hundred Days.