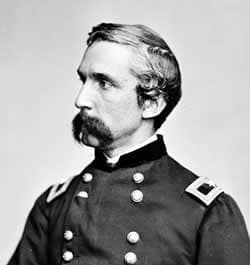 Born in Brewer, Maine, Joshua Lawrence Chamberlain graduated Bowdoin College in 1852 and returned three years later to teach rhetoric there. In 1862, he was granted a leave of absence to study abroad, but enlisted in the 20th Maine Volunteers instead. Over the course of the war, he was involved in a total of 24 engagements and was six times wounded, on one occasion so gravely that he was listed among the dead. For his role in defending the Union left flank at Gettysburg, he was awarded the Congressional Medal of Honor. Promoted to Major General in March of 1865, he was named to receive the official surrender of the Army of Northern Virginia at Appomattox. Following the war, Chamberlain served for four years as governor of Maine, later returning to Bowdoin, where he served as president of the college from 1871 to 1883.