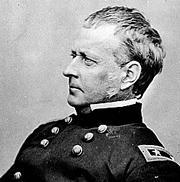 Born in western Massachusetts, Joseph Hooker graduated West Point in 1837 and served in the Mexican War, later leaving the army to farm in California. Upon his return to military service at the outset of the Civil War, he proved an excellent organizer with a flair for self-promotion. Known as “Fighting Joe,” he replaced Burnside after the Battle of Fredericksburg but was himself replaced (by Meade) following the decisive Union defeat at Chancellorsville. Despite his demotion, he regained considerable prestige as a corps commander in the Chattanooga and Atlanta campaigns.