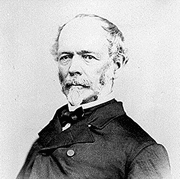 A career soldier with long experience, native Virginian Joseph Eggleston Johnston graduated West Point in 1829 and fought in the Mexican War. He would play a key role at First Bull Run, rushing troops to the support of General Beauregard and sharing credit for the Rebel victory. Rising to overall command in the East, he was wounded during the Peninsular Campaign and later assumed command in the West, confronting Grant at Jackson, Mississippi, and Sherman during the Atlanta Campaign. At the end of a final campaign against Sherman, he surrendered near Raleigh, N.C., in April 1865.