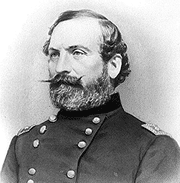 A classmate of Joe Hooker, Braxton Bragg, and Jubal Early, Connecticut native John Sedgwick graduated from West Point in 1837 and served in the Mexican War. He commanded a brigade at the outset of the rebellion and a division in the Peninsular Campaign. Severely wounded at Antietam, he returned to service after a leave of several months. Although a strict disciplinarian, he was well-liked and respected by both his men and his peers, and was the first to be offered command of the Army of the Potomac following the Union defeat at Chancellorsville. He was killed by a sniper near Spotsylvania Courthouse in May 1864.