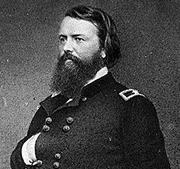 Born in Kentucky, John Pope graduated West Point in 1842 and began his Civil War service by clearing the upper Mississippi of Rebel forces as far south as Memphis. He was brought east in 1862 to lead a newly-formed army in support of McClellan’s operations on the Peninsula, but by the time he was prepared to mount an offensive, McClellan had been driven away from Richmond, allowing Robert E. Lee to turn his full attention on Pope. A victim of his own bombast as well as a good deal of professional intrigue, Pope was soundly defeated at Second Bull Run and his forces driven back within the defenses of Washington. He was replaced shortly thereafter.