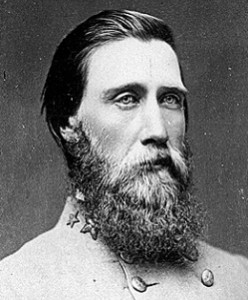 A native of Kentucky, John Bell Hood graduated West Point in 1853 and served at various outposts in the West. He won early recognition in the Civil War at the head of Texan troops, seeing action at The Seven Days, Antietam, and Fredericksburg. Courageous to the point of recklessness, he lost an arm at Gettysburg and, two months later, a leg at Chickamauga. Returning to the field during the defense of north Georgia, he was eventually driven out of Atlanta, and later led an ill-fated campaign into Tennessee, suffering a final defeat in the Battle of Nashville. Following the war, he headed an insurance company in New Orleans, where he died of yellow fever at the age of 48.