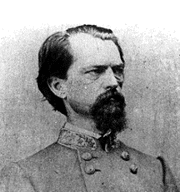 Born in western Georgia, John Brown Gordon practiced law before enlisting in an Alabama regiment known as the Raccoon Roughs. Though he lacked formal military training, he showed natural leadership ability and rose steadily through the ranks. Wounded in five places at Antietam, he survived to play a key role in the defense of the Mule Shoe salient at Spotsylvania. After serving in under General Early at Cedar Creek, he returned to Lee’s command and would be chosen to lead the surrender procession at Appomattox. Following the war, Gordon entered politics, serving as U. S. senator as well as governor of Georgia.