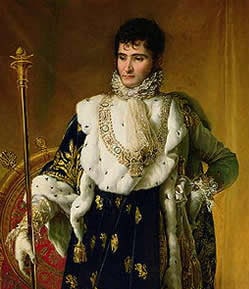 The youngest son of Carlo and Letizia Buonaparte, Jérôme would come to manhood in a world increasingly dominated by his brother’s meteoric career. At 19, he met and married the daughter of a Baltimore merchant, only to have the marriage annulled by Napoleon. Placed in corps command during the Russian Campaign, he had a falling out with Marshal Davout and left the campaign in a huff. At Waterloo, he led a diversionary attack against the farm complex at Hougomont. Following Napoleon’s death, Jérôme became governor of Les Invalides under the reign of his nephew, Louis Napoleon, and was named Marshal of France in 1850.