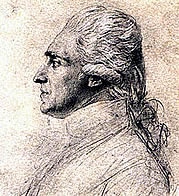 Jean-Baptiste Donatien de Vimeur, Comte de Rochambeau, was a French aristocrat appointed by King Louis XVI to command a French expeditionary force of some 6,000 men in support of the American cause. Arriving in Newport, Rhode Island, in July 1780, he remained there a full year due to a British blockade of Narragansett Bay, eventually joining the Continental Army along the lower Hudson. By this time his fellow countryman, Lafayette had maneuvered Lord Cornwallis’ army into an awkward situation on the York Peninsula in Virginia. Seizing upon the opportunity, the combined forces of Washington and Rochambeau raced south, forcing Cornwallis’ surrender at Yorktown and effectively bringing an end to the war.