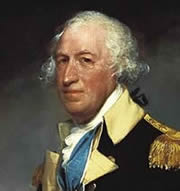 Horatio Gates was born in England and entered the British Army at age 18 as a lieutenant. He fought Alongside George Washington in the French and Indian War, but was wounded early in the conflict and eventually sold his commission. In 1773 he moved to Virginia and renewed his acquaintance with Washington, who helped him land a commission in the Continental Army at the outbreak of the Revolution. Though his experience made him a valuable asset as a field commander, Gates would prove overly cautious, and his loyalty to Washington would be suspect. While credited with the key victory at Saratoga, he had little to do with the actual fighting, and would later be widely criticized for abandoning the field at Camden in advance of his troops.

Help support Age of Revolution content with a small donation of $2.95.
Horatio Gates