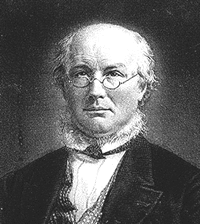 An influential figure throughout the war era, Horace Greeley began his career as a struggling printer in Vermont. Moving to New York City in 1831, he started a series of small publications before founding the hugely successful New York Tribune in 1841. Expressive of Greeley’s views on a wide range of political issues, the Tribune became a mouthpiece for the growing anti-slavery movement in the north and would be instrumental in the formation of the Republican Party and the nomination of Abraham Lincoln for president in 1860. Shortly after the outbreak of war, Greeley advocated a speedy advance on Richmond, but he showed little enthusiasm for continuing the conflict following the Union defeat at First Bull Run.