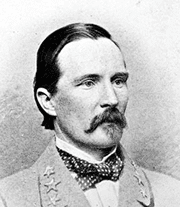 A first cousin to fellow Virginian, George Pickett, Henry Heth graduated West Point in 1847 and served at various outposts in the West. After taking part in the Perryville Campaign, he returned east and assumed divisional command during the Battle of Chancellorsville. Two months later, during Lee’s invasion of Pennsylvania, Heth advanced his division from Cashtown to Gettysburg in search of a supply of shoes. Encountering Union cavalry west of the town, he undertook a series of attacks that drew both armies to the scene of the war’s most decisive engagement. Wounded in the ensuing battle, he returned to duty during the retreat and served to the end of the war.