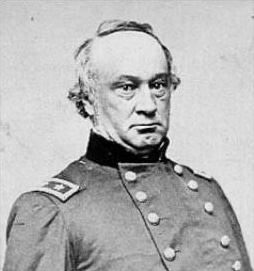 A native of New York state, Henry Wager Halleck graduated West Point in 1837. He left the military briefly to practice law in California, but returned to service at the outset of the war and was placed in charge of the Department of the Missouri. Following the battle of Shiloh, he assumed personal command of the Army of the Tennessee, displacing Grant to undertake a tentative advance upon Corinth in which he would reveal little instinct for field command. In July of 1862, he was promoted to general-in-chief, enabling Grant to resume his winning ways in the Vicksburg Campaign. Known as “Old Brains,” Halleck was eventually replaced by Grant in 1864, becoming chief of staff under his former subordinate.