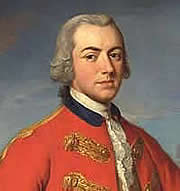 Though the date and place are not known for certain, evidence suggests that Henry Cinton was born in 1730, possibly in Newfoundland. With the help of his father, an admiral in the Royal Navy who later served as Governor of the Province of New York, Henry embarked on a military career at an early age and eventually served as an aide-de-camp under the Duke of Brunswick during the Seven Year’s War. Upon the outbreak of the Revolution, he was sent to Boston, where he played a key role in the battles of Bunker Hill and Long Island. He succeeded General Howe as commander in chief in 1778, by which time he would be obliged to fight a largely defensive war. Following Cornwallis’ defeat at Yorktown in 1781, Clinton was replaced by Guy Carleton.

Help support Age of Revolution content with a small donation of $2.95.
Henry Clinton