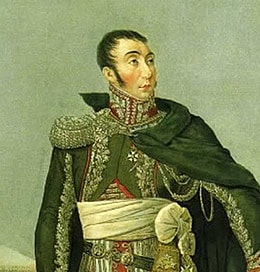 A nobleman by birth, Emmanuel de Grouchy pursued a military career from a young age and adopted the republican cause soon after the Revolution, rising to command of a division of cavalry. Distinguishing himself at Eylau and Friedland, he commanded cavalry in the Army of Italy during the 1809 campaign and later received the unenviable position of cavalry commander during the retreat from Moscow. During the Waterloo Campaign, he was ordered to pursue the retreating Prussians and prevent their union with Wellington but was slow to act, and on 18 June, with a major battle blowing up some ten miles away, he engaged the Prussian rearguard in a desultory action at Wavre rather than march to the aid of the main army. The Prussian vanguard, meanwhile, reached the field at Waterloo in time to decide the issue, and Grouchy’s failure would be widely blamed for the French defeat. Escaping to America following the battle, in 1821 he returned to France, where his titles were restored and he lived to age 80.