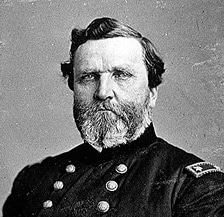 A native of Virginia, George Henry Thomas graduated from West Point in 1840 and served in the Mexican War. At the outbreak of the Civil War, he remained a dedicated Union man and quickly rose to corps command under General Halleck. Eventually serving under Rosecrans in the Army of the Cumberland, Thomas would prove instrumental in stemming the Rebel tide at Stones River, and later won fame for his heroic stand in the face of a massive Rebel breakthrough at the Battle of Chickamauga. Placed in command of the army shortly thereafter, he went on to crush John B. Hood’s invasion of Tennessee at Nashville in December 1864.