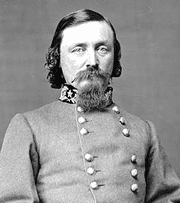 George Edward Pickett graduated West Point in 1846, and served with distinction in the Mexican War, remaining in Federal uniform until the outbreak of the rebellion. Rising to divisional command under General Longstreet, he was wounded at Gaines Mills (Peninsular Campaign) and would not see action again until the Gettysburg Campaign a year later. Chosen with Johnston Pettigrew to lead the assault on the Union center at Gettysburg, he would give his name to the failed charge that marked high tide for the south. He later took part in the defense of Petersburg and was in command of Rebel forces at the Battle of Five Forks, which led to the unraveling of the Petersburg defenses and the end of the war.