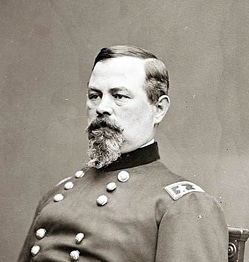 Irvin McDowell was born in Ohio and received his early education in France. He returned to the U.S. to attend West Point, graduating in 1838. Chosen by Lincoln to command the newly-formed Union army, he undertook the first major campaign of the war, moving against Confederate forces around Manassas, Virginia. Despite delays, the ensuing battle nearly succeeded in turning the Rebel left wing, yet ended in a Union rout, leading to McDowell’s replacement. The following year, as a corps commander under John Pope, McDowell fought in the Battle of Second Bull Run, in which he would be widely blamed for failing to inform his commander of the whereabouts of Longstreet’s corps. He would not lead troops in combat again.