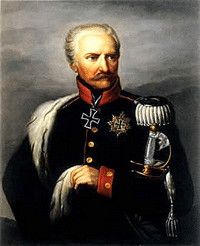 Gebhard Blücher was born in northern Germany and joined the Swedish Army at the age of sixteen.  He later joined a Prussian regiment, where his fiery nature got him in trouble with military authorities. After a lengthy stint as a civilian, he returned to his regiment in 1787 and rose to the rank of lieutenant general in 1801. Upon Napoleon’s reversal of fortune in Russia, Blücher came into his own as a leader of the Allied counter-march, proving himself in a series of battles leading up to the French defeat at Leipzig (1813). The following year, he was instrumental in the fall of Paris and Napoleon’s capitulation at Fontainebleau. His greatest triumph came a year later when, despite being unhorsed and nearly killed at Ligny, he kept his army intact and rode to Wellington’s rescue at Waterloo. He died four years later at his home in Silesia at the age of 76.